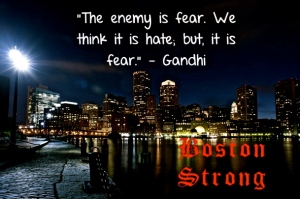 In 2008, I filmed an interview in Boston in which Professor Akbar Ahmed, Ibn Khaldun Chair of Islamic Studies at American University, spoke with Noam Chomsky, Professor of Linguistics at Massachusetts Institute of Technology, about American identity. According to Chomsky: “[America] is a very frightened country … which is kind of ironic because [we’re] at a level of security that nobody’s ever dream of… The theme is we’re about to be destroyed by an enemy.” He added that the enemy “[today] is Muslims” and “[t]he paranoia is very real.”

Chomsky’s thesis is even more pertinent in the aftermath of the Boston marathon bombings, which were carried out by two misguided young men claiming to act in the name of Islam. American politicians in Washington, D.C. are now calling for increased profiling techniques of Muslims and more surveillance in American mosques. Just days after the marathon bombings, a young Muslim woman in suburban Boston was attacked by a man who shouted “(Expletive) you. (Expletive) you Muslims, You are terrorists, you are the ones who made the Boston explosion.”

My own personal experience has been equally troublesome. After the manhunt for the suspects ended, I attended Mass at a Catholic Church in Newton, where the parish priest gave a brief sermon warning about the “global jihad” and the dangers of “Islamic supremacism.”

Chomsky was right: We are a frightened people.

Since filming the interview between Ahmed and Chomsky, I have been studying the experiences of young Pakistani men in Boston, research which has also given me the opportunity to spend many hours in the company of Muslims. What I have found in my encounters is a very active and content Muslim community which has no reason to be feared. Here are some of my stories.

Over the last two summers during Ramadan, the Islamic holy month, I have met with the Muslim community at the Islamic Center of Boston (ICB) in Wayland, a suburb of Boston. When I asked Malik Khan, a former president of the ICB, if I could attend an iftaar, the breaking of the day’s fast, he invited me with open arms and said that non-Muslims are always welcome. When I arrived I was greeted warmly by a diverse and well-educated community that is unquestionably assimilated into Boston society. The ICB frequently invites speakers to discuss how Muslims can better integrate into American society and recently brought students from the suburban town of Wellesley to explain the fundamentals of Islam to them. The ICB also hosts interfaith events to build bonds between various religious communities and also invites locals to watch Boston Celtic’s basketball games during the NBA playoffs. These events have demonstrated to me that the ICB is not only tolerant and enlightened, but also well-integrated into Boston’s proud civic culture.

Many of the young Pakistani men I have interviewed attend the ICB in Wayland. These young men were born and raised in nearby towns and had similar “American” childhoods to what I had growing up in Needham, another suburb of Boston. Most of the men I have interviewed have been extremely well educated; some attending America’s best schools including Harvard University and other Ivy League universities. Several of these young Pakistani men work for the United States Government, while others are training to become doctors and engineers.

My experience with Pakistani immigrants in Boston has made a great impression on me. Many of these newcomers have come to some of the area’s top universities and are proud to live in the city’s multicultural atmosphere. Supporting the Red Sox and other local sports teams is like an obsession to many of them. What could be more Bostonian than that?

Last summer I visited Boston’s biggest mosque in Roxbury, where Imam Suhaib Webb guides a thriving and diverse community of both native-born Muslims and immigrants. When I wrote on Twitter that I would be attending an iftaar, Imam Webb tweeted back to me saying he would be happy to welcome me and hoped that he would be able to meet me at the event. During our evening meal I had the pleasure of speaking with a white convert to Islam from Cape Cod, a black Muslim man and former Catholic, and a half-Iranian, half-Pakistani man. Our discussion turned into an interfaith affair where each of us shared our thoughts on where Catholicism — the religion I practice — and Islam meet on common ground. The black Muslim was especially interested in learning about other faiths, so much so that he was carrying around an old copy of the Torah. When I asked him why he was carrying it, he said “How can we have peace and overcome fear if we don’t understand where others are coming from?”

My research has also taken me to the American Islamic Congress (AIC), a non-profit civil rights organization based on Newbury Street, just blocks from the site of the Marathon bombing. When I visited the AIC last summer I had the opportunity to watch a young student perform a traditional Hindu dance, which proved to me that many Boston Muslims appreciate learning about non-Islamic cultures. In the near future, the AIC is hosting an event where Muslims and non-Muslims can come to Newbury Street to listen to the beautiful sounds of Sufi music. These events at the AIC are a sign of Muslims’ interest in promoting cultural events that can help build bridges through cross-cultural interactions and dialogue.

Boston also has some incredible non-Muslim voices that understand Islam and the Muslim community. Barry Hoffman, the Jewish honorary consul general of Pakistan in Boston, is one such role model. Barry is a popular figure among Boston Pakistanis, especially with immigrant students. His love for Pakistanis came through when he once described to me a predicament of a 4-year-old Pakistani child in Boston who needed a heart operation but could not get a visa after 9/11. Barry’s eyes filled with tears and his voice choked. He tried to continue with the story but could speak no more. Barry’s love for humanity affected me deeply because I also shared his agony. It is this sense of feeling the pain of others that is now needed in Boston, as many Muslims might continue to experience backlash in the aftermath of the marathon bombings.

In the coming months many Bostonians might fall into the trap of Islamophobia and discrimination against their Muslim neighbors. My advice for those who are thinking about Muslims is to visit a nearby mosque. Overcoming misperceptions which are exacerbated by the media is possible, though it will not be achieved through isolation. Bostonians must reach out to their Muslim neighbors in the spirit of former Bostonian and American founding father, Benjamin Franklin, who once stated: “Even if the Mufti [Muslim leader] of Constantinople [present day Istanbul, Turkey] were to send a missionary to preach Mohammedanism [Islam] to us, he would find a pulpit at this service.”

Franklin’s spirit of religious freedom and tolerance is ingrained in the history of Boston. We must not forget it, especially during a time like this when Islam is in the spotlight.

Our strength as Bostonians comes in our diversity. We should embrace our fellow Muslim Bostonians, not fear them.

6 thoughts on “Bostonians Will Transcend Fear After Marathon Bombings”