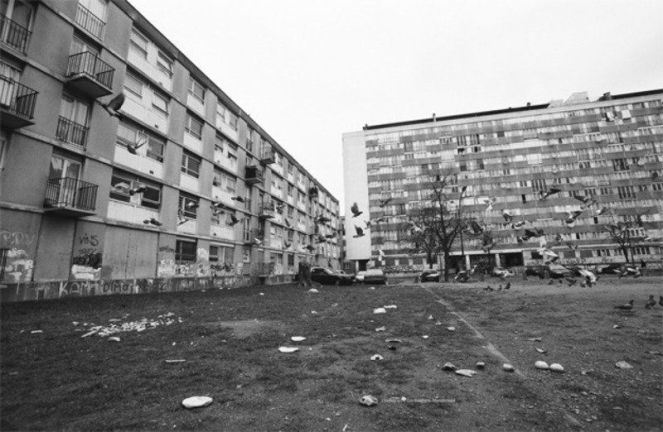 Looking back at the attack carried out by the El Bakraoui brothers in Brussels, Belgium, I cannot help but notice how news media, intellectuals and politicians blame “Islam” or ISIS for this tragic event. Such a conclusion is overly simplistic and lacks a deeper understanding of what drives young men to act out violently.

The two Belgian brothers who blew themselves and 31 other people up started out as carjackers and bank robbers before graduating to terrorism, as pointed out by the New York Times. Khalid, 27 years old, participated in at least four carjackings and a bank robbery in the fall of 2009. On October 27, 2009, he helped kidnap a bank employee and stole 41,000 euros at the Brussels branch of AXA bank. In September 2011, the Belgian authorities finally nabbed Khalid. A court convicted him of criminal conspiracy, armed robbery, possession of stolen cars, and possession of weapons, and sentenced him to five years in prison. He was paroled in 2014.

Ibrahim, 29 years old, was the lookout for a robbery attempt in January 2010 at a Western Union branch in central Brussels. The New York Times reports that Ibrahim opened fire with a Kalashnikov rifle, hitting a police officer in the leg. Ibraham and the robbers later surrendered to police in Laeken, the working-class neighborhood where the El Bakraoui brothers were born and bred.

NPR notes that Laeken is among those districts in the Belgian capital with high unemployment, low social mobility and poor integration, creating a lot of frustrated residents – just like other neighborhoods that produced the attackers in Paris. We do not know precisely the timing, but at some point Khalid and Ibrahim realized that they were from the poorer side of the city. At some point they discovered the darker side of Belgium – the inequality, the racial hierarchy, the social exclusion. Unfortunately, they responded to this reality with rage. They saw violence as the solution. It was their responsibility to inflict it on Belgian civilians. They only needed a nudge.

The El Bakraoui brothers, like other downtrodden people living in impoverished urban environments, probably had gut-wrenching feelings of being excluded from mainstream society and likely faced a barrage of racist instances. Growing up, they probably dedicated their energy to fitting in as the brown kids in a predominantly white world. That is certainly not an easy process.

The parents of the El Bakraoui brothers built a little bubble for themselves when they moved to Belgium. The New York Times describes their father, a retired butcher, as a devout Muslim who emigrated from Morocco; their mother is described as “conservative and reclusive.” The El Bakraoui home was an enclosed world where they could eat familiar food, speak their native tongue, and follow the old ways of Morocco. And because the parents re-created a little place of Morocco in Laeken, they assumed that their children would stay within that cocoon. That was not the case with Khalid and Ibrahim.

Therein lies the problem – the second-generation in Belgium cannot separate themselves from the environment they live in. The El Baraouki brothers went to public schools, crossed borders that were invisible to their parents, and quickly understood that the direction of their lives would not conform to the straight lines their parents lived by. Perhaps the El Baraouki brothers came to realize that their two worlds, the two sides of themselves, were fundamentally antagonistic. In sociology, this condition can be understood as “doubleness” which is exacerbated by the deep burn of social exclusion and racism (see Eboo Patel’s “Acts of Faith”, page 13, for more analysis on being torn between cultures).

Adolescent identities tend to shift within the blink of an eye. At some point, Khalid and Ibrahim shifted into a darker world that gave them a sense of more concrete sense of identity. One thing that made sense to the El Bakraoui brothers was a radical theory of anger and violence. By all accounts, they had a vague sense of being Muslim without any real grounding in how that was relevant or useful to their everyday lives as Belgian citizens. Surely these were not young men inspired by the mystical poetry of Rumi, the glories of Islamic architecture or the immense wealth of knowledge rising out of Islamic civilizations such as al-Andalus or the Ottoman Empire. Certainly they were not learning about the strong tradition of religious pluralism and civil society in the Islamic tradition.

When they were younger, the El Baraouki brothers sought direction and purpose, and ultimately found Muslim extremism. They committed themselves to a puritan vision, one that glorifies violence and pushes the right buttons to harden young Muslims into a terrorist commitment. This is the identity type that met them on the crossroads of their identity crisis, their “doubleness”. They probably came in contact with an influential Muslim “leader” who told them to look at how Muslims are being oppressed all over the world. The Muslim “leader” likely told the brothers that they are living in the belly of the satanic beast – “Western culture” – and that they only way for them to purify themselves – and society – is to kill non-Muslims, the so-called “infidels”.

So how do two ordinary young men committed to Islam turn into suicide bombers? The answer lies in the influences they had, the activities that they were involved in, and the people who shape their understanding of Islam. To blame Islam is far too simple; such an argument is completely void of any solid grounding in sociology. After all, we must also consider the questions: how do some young Muslims become champions of religious pluralism? Why are some Muslims courageous and compassionate in the face of injustice? Are we to “blame” Islam for these too?

Ultimately, something has to change to avoid moments such as the Brussels attack. Somehow we need to reach out to downtrodden young men in a way that calls for hopeful, loving change, not anger and rage. And I say this not simply in the context of Muslim men, but all men around the world who act out violently.

Khalid El-Baraouki, Ibrahim El-Baraouki, Dylan Roof and James Holmes. These young men committed acts of mass murder. They did so because they had nothing to live up to. They had no principles to talk about, no community that would look out for them. Who cared for them? Who would notice if they were gone? Specifically, the El Baraouki brothers needed an influence to teach them that Belgian identities and Muslim identities are symbiotic, not opposed to each other. Who was interested – and capable – in teaching them that?

Everyone – and I mean everyone – needs to spend more time thinking about how to counter social exclusion in a more permanent way. Sitting back and thinking about inequality and racism is not enough. We need to spend less time on teaching people how to criticize the world and more time on finding real solutions to the world’s ills. What skills can we deploy to prevent young men from killing themselves? What is preventing us from seeking effective practical methods of helping people such as Khalid and Ibrahim? How do we constructively engage with violence and mass murder?

These questions have no simple answers. Perhaps it begins by creating a safe space that brings out the various talents of diverse communities. Once we have created that space, then we can amass talent that can nourish us all.

6 thoughts on “Here’s Why Young Men Become “Terrorists” (Hint: It’s Not Islam) And What We Can Do About It”

Serenity ☁️ Always remember to look up! ✨
Sunday vibes 🙏🏻 Volume on 🔊
❤️ in San Antonio.
The one-year publication anniversary of "The Humanity of Muhammad - A Christian View" is here. Would you like a free autographed copy? If so, answer this question: “What are you doing for the sake of our common humanity?" Leave answers in comments. I'll follow up w/ winners.
Happy Feast Day of St. Mary Magdalene! Let us remember that a *woman* was the first person to see the risen Jesus, who said to her: "Go to my brothers & tell them, 'I am going to my Father & your Father, to my God & your God.'" Imagine what she was thinking as she hurried to the Apostles. Mary is the “Apostle to the Apostles." Mary, pray for us! 🙏🏻 Photo credit: “Christ Appearing to Mary Magdalene as a Gardener” by Rembrandt (1638).
Me and the little 😇. Someone is about to be baptized, God willing.
Meet Govindan Gopalakrishnan, a self-taught Indian architect also known as “Mosque Man.” For over 60 years, Govindan has built dozens of mosques, four churches, & a temple. Recently, he told Al Jazeera that he does it for “the oneness of humanity.” Govindan keeps copies of the Qu’ran, Bible & the Gita at his modest home in India’s southern city of Thiruvananthapuram in Kerala. He says he is a firm believer in religious harmony. “I observe roza (fast) during the holy month of Ramadan as well as the 41-day fast during the Sabarimala pilgrimage. My wife is a Christian, so I join her for the Easter fast as well. One of my two sons is married to a Muslim lady. I welcome all religions to my home & give them equal respect.” Thank you, Govindan, for your courage, decency, inclusiveness, & thoughtfulness. It is inspiring! Photo courtesy: Govindan Gopalakrishnan
You are never alone.
I enjoyed my time today at the Second Baptist Church (Woodway) in Houston. The purpose of the visit was to engage in filming for an upcoming project, which I am, God willing, about to launch in a few weeks. The first picture provides a brief glimpse of the project’s content. I am working on a promotional video with a talented videographer who happens to be Baptist. If God wills it, the project will liven hearts and shape minds for the betterment of humanity. The Second Baptist Church (Woodway) is very impressive by the way! (see second picture).
Give love unconditionally.
Keep your head up & carry on.
Faith works through love.
We should do the same.
“Children are a gift from God; they are a reward from him” (Proverbs 127:3). Truer words have never been spoken.
The way is hard, & those who find it are few (Matthew 7:13-14).
Let the truth be your shield.
I second this call.
Today is the Feast of Saints Peter & Paul. Peter was a simple fisherman, but Jesus still chose him to lead the Church. Paul persecuted Christians, but Jesus still chose him to bring his name to the Gentiles. Both saints came from humble & even rocky beginnings. I find their journeys inspiring. They were touched by God’s grace. Remember this if you are ever feeling unworthy. You are capable of extraordinary things.
To understand someone’s mind, and to see their heart, look into their eyes.
Solitude & silence ✨
Loading Comments...
%d bloggers like this:
%d bloggers like this: