Picture this. Muslim gunmen spray a bus with bullets, killing two passengers in northern Kenya. The gunmen are part of al-Shabab, a militant group based in East Africa. After opening fire, the militants asked the 62 Muslims on board the bus to identify the Christian passengers. The Muslims refused to reveal their identities, telling the militants, “either kill everyone or leave.”

The Washington Post reports: “There was a sound of gunfire, and the impact of bullets striking steel, and the bus suddenly lurched to a stop just outside the northeastern Kenyan city of El Wak … More than 10 Somali militants clambered on board, heavily armed, witnesses of the Monday attack told the Daily Nation, a Kenyan newspaper. The gunmen began shouting demands at the passengers, ordering them to get off the bus and separate into groups — Muslims on one side, everyone else on the other … But Muslims aboard the bus traveling through northeastern Kenya helped protect the Christian passengers, witnesses and officials told numerous media outlets.”

The bus attack is now the subject of a fictional film adaptation that focuses on religious integration and coexistence. “Watu Wote,” Swahili for “All of Us,” is a touching story that shows humanity can win even in the worst situations.

Katja Benrath, the film director of “Watu Wote,” told Crux Now: “In this life-threatening moment, people stood up for each other – not caring about the religion of the next person because they wanted to save and shield human beings.”

The Muslims that protected the Christians have provided us a crucial example – unity of purpose in the face of religious fanaticism and discrimination. In the end, we are one people.

Prophet Muhammad would be proud of the Muslims that stood up for their Christian brothers and sisters. Muslims are commanded by Muhammad to protect Christians and their churches until the end of days. 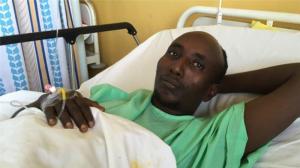 Salah Farah is perhaps the main hero of the bus incident in northern Kenya. He was shot after refusing to be separated from Christian passengers. Farah later passed away to his wounds, leaving behind four young children aged between two and 10. After his death, an online campaign was started to raise funds for his family. He is now a symbol of Muslim-Christian unity.

Here is the trailer:

One thought on “This Is Islam, Too: New Movie on Muslims Protecting Christians in Kenya Bus Ambush”

Francis will be the first pope in history to be welcomed in Iraq, the birthplace of Abraham, the original common link between Jews, Christians, & Muslims. His visit between March 5-8 will provide a much needed spiritual boost to the persecuted Iraqi Christian population & strengthen his valiant efforts in bridge-building with Muslims. Godspeed, Pope Francis! Photo credit: Ahmad al-Rubaye - AFP via Getty Images.
What are the solutions to the escalation of hate speech against minorities in the West?
Six months! 🎉 🎈 🎊
Reminders.
The @agakhanmuseum’s new podcast, “This Being Human,” breaks down stereotypes, highlights connections between cultures, & uncovers new insights on the human condition.
Researching Islam has provided me with the opportunity and privilege to live my faith while encountering Muslims. My faith is rooted in compassion, knowledge, love, and peace. I have tried to share these things with the Muslims in my midst.
Serving humanity is what life is all about.
People of conscience are waiting for more countries to act.
Set your eyes on the “churmosquagogue.”
*Allyship* is the energetic process of using one’s own powers & privileges to assist a person and/or group in need of assistance & solidarity.
Freeing someone is one thing. Sustaining a culture that enables social mobility is another. Muhammad knew that freedom was not enough. He understood that society need certain pillars in place to allow human beings to maximize their potential.
The Oxford University Islamic Society is hosting this event today titled “Who Was Muhammad?”
A little grit goes a long way.
My recent talk for the @WMuslimCC focused on the “humanity” of Prophet Muhammad.
The original & forever Valentine ❤️
My new Valentine ❤️ Happy Valentine’s Day!
Bridges are better.
Striving for humanity.
Everyone is free to join us live via YouTube on Saturday, February 13th at 6:00PM ET for a book talk on “The Humanity of Muhammad - A Christian View.”
Striving to be well rounded.
Loading Comments...
Comment
×
%d bloggers like this:
%d bloggers like this: