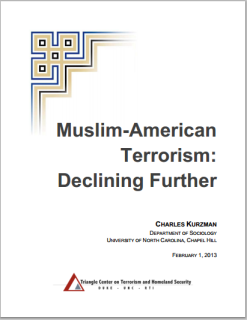 Mass shootings such as those in Newtown, Connecticut, and Aurora, Colorado, by far exceed the number of those killed in Muslim-related terrorism in the U.S., new research says.  “Terrorist” attacks in 2012 are down from 21 in 2011, 26 in 2010 and 49 in 2009, according to the fourth annual report by North Carolina’s Triangle Center on Terrorism and Homeland Security.

Ironically, as Muslim-related “terrorist” attacks are down, “Islamophobia” crimes are on the rise in the U.S. Muslim groups across the U.S. are reporting increased rates of anti-Muslim incidents, discrimination and Islamophobia.  The San Francisco Bay Area office of the Council of American-Islamic Relations found a 10 per cent increased in anti-Muslim incidents in 2012.  CAIR reported 283 separate incides of over the course of the year and included, among other issues issues, complaints of employment discrimination, requests for legal representation for voluntary interviews by FBI and other law enforcement agencies, and reports of hate crimes.

“Whenever a symbol of any faith is targeted … it makes sense to consider a bias motive for the crime,” said Ahmad Rehab, executive director of CAIR in Chicago. He added:

“Muslim constituents will work to make lawmakers aware of the growing problem of Islamophobia and of the veiled and camouflaged manner in which it is being promoted. It is imperative that local and national leaders speak out and condemn the growing level of anti-Muslim prejudice and work with their Muslim constituents and their allies to oppose this promotion of bigotry against minorities, whatever the source.”

In an effort to curb bigotry against Muslim Americans, a Muslim activist group has launched a new ad campaign to reclaim a word – “jihad” – they say has been abused and distorted by Muslim extremists and by anti-Muslim groups.  The #MyJihad campaign is using print ads and social media to educate the public about what they say is the true meaning of the word “jihad.”

The #MyJihad campaign has been launched during a time where research shows that excessive fear of homegrown terrorism by radicalized American Muslims is unfounded. In just 2012 alone, mass shootings claimed lives of at least 66 Americans – “twice as many fatalities as from Muslim-American terrorism in all 11 years since 9/11,” says sociology professor Charles Kurzman.

Challenges persist despite the decrease in “terrorist” attacks among Muslim Americans. “Until public opinion starts to recognize the scale of the problem has been lower than we feared, my sense is that public officials are not going to change their policies,” Kurzman was cited by Wired as saying. The FBI continues geo-mapping Muslims regardless of their involvement in any crime, Wired says. Moreover the Patriot Act has been extended until at least 2015 and other contentious post-9/11 laws that remain in place.

Six months! 🎉 🎈 🎊
Reminders.
The @agakhanmuseum’s new podcast, “This Being Human,” breaks down stereotypes, highlights connections between cultures, & uncovers new insights on the human condition.
Researching Islam has provided me with the opportunity and privilege to live my faith while encountering Muslims. My faith is rooted in compassion, knowledge, love, and peace. I have tried to share these things with the Muslims in my midst.
Serving humanity is what life is all about.
People of conscience are waiting for more countries to act.
Set your eyes on the “churmosquagogue.”
*Allyship* is the energetic process of using one’s own powers & privileges to assist a person and/or group in need of assistance & solidarity.
Freeing someone is one thing. Sustaining a culture that enables social mobility is another. Muhammad knew that freedom was not enough. He understood that society need certain pillars in place to allow human beings to maximize their potential.
The Oxford University Islamic Society is hosting this event today titled “Who Was Muhammad?”
A little grit goes a long way.
My recent talk for the @WMuslimCC focused on the “humanity” of Prophet Muhammad.
The original & forever Valentine ❤️
My new Valentine ❤️ Happy Valentine’s Day!
Bridges are better.
Striving for humanity.
Everyone is free to join us live via YouTube on Saturday, February 13th at 6:00PM ET for a book talk on “The Humanity of Muhammad - A Christian View.”
Striving to be well rounded.
What matters most to me.
The @wmuslimcc has organized an event on “The Humanity of Prophet Muhammad.”
Loading Comments...
Comment
×
%d bloggers like this:
%d bloggers like this: