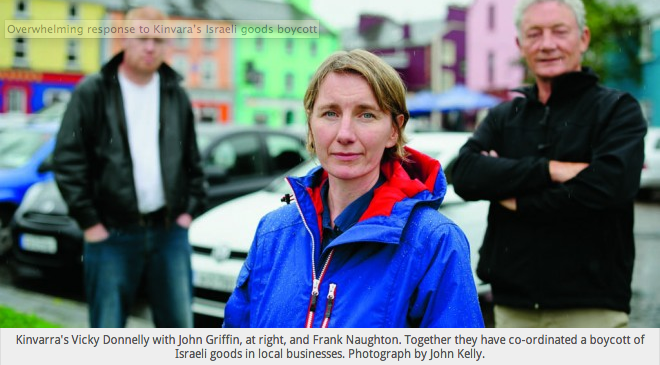 The group behind Kinvara’s business boycott of Israeli goods has described the response to the collective move as “overwhelming.”

Kinvara (Cinn Mhara, meaning “head of the sea“), a village in County Galway, has become the first community in Ireland to unite against Israel’s military action in Gaza.

According to the Irish Palestine Solidarity Campaign (ISPC), Kinvara is the first and only town in Ireland to take this collective action.

Since the boycott was announced, John Griffin, Frank Naughton, and Vicky Donnelly have been inundated with support locally, nationally, and even internationally.

“All three of us have been approached by people in the community who are delighted to see an action like this happening here. We have received messages of support across social media and even by phone … We have had calls from Cork, Dublin, Northern Ireland and a man in France, who was so inspired by what he saw on the internet about what is going on in Kinvara that he wanted more information,” Ms. Donnelly said.

I am feeling thankful for the past, present, & future. The past is my teacher, the present is my reality, & the future is my hope. May I be granted courage as I sail forward into uncharted waters. 🙏🏻🕊☘️
Join me later today (7:00 PM BST) when I'll be joining the @openiftar virtual iftar to speak about “The Humanity of Muhammad.” You can register at http://bit.ly/RTPVirtualOI or watch the livestream on their Facebook page #ramadantentproject #openiftar
🙏🏻🕊❤️
Greetings of peace: you are free and welcome to join this webinar tomorrow. I will be engaged in a conversation/discussion on my latest book, “The Humanity of Muhammad: A Christian View.” Organized by the Department of Islamic Sciences at Bedër University in Albania. Click the link in my Instagram biography for the Zoom link.
Happy Easter! Today humbly reminds us of the beautiful blessing of new life!
Spring has sprung. A time of hope and renewal. I am ready.
I continue to feel so blessed and honored to call her my wife. She has brought me so much joy and peace. Today is our two year wedding anniversary! 🎉
😇 💫💎
“Breaking bread” & food in general is an essential part of my existence & routine. I love to cook & share food, especially Italian food, on a daily basis.
Today is the birthday of my “Papa” (grandfather), Joseph Anthony Tedesco.
Forgiveness is liberating.
Tikkun olam.
The Considine family is feeling a little extra lucky on this Saint Patrick’s Day. Lá Fhéile Pádraig sona duit! ☘️
What inflicts one, inflicts all.
This is the prayer that has resonated with me *the most* in recent times. Authored by @jamesmartinsj.
Oxford University Press is engaged in the marketing of my next book: “People of the Book: Prophet Muhammad’s Encounters with Christians” (Hurst, Summer 2021). The pictures include a cover, book description, & contents page. The titles of the chapters provide an early glimpse 🙏🏻.
I am enjoying these early morning talks with my kindred spirits in India.
Someone is excited for Saint Patrick’s Day! ☘️❤️
Who is Abraham to you?
The Muslim Converts’ Association of Singapore (@darularqamsg) has organized a book talk on “The Humanity of Muhammad - A Christian View.”
Loading Comments...
Comment
×
<span>%d</span> bloggers like this:
<span>%d</span> bloggers like this: