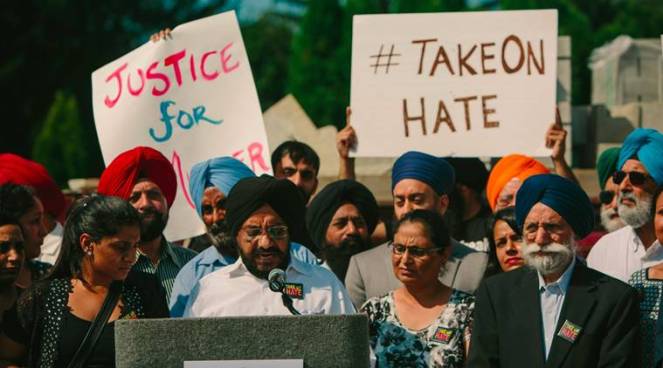 Let me explain to you why it is hypocritical to say that Islamophobia is a simple result of “rational disagreement” with the tenets of Islam and not the distrust of people who look different from “normal” Americans.

Consider this CNN story which documents another hate crime perpetrated by Islamophobic individuals. Again and again, we are witnessing how Islamophobia falls on non-Muslims such as Sikhs, who are not Muslim but “look Muslim.” Sikh men are often selected for attacks because they have a beard and wear a turban in accordance with their faith.

Although the Sikh turban signifies commitment to justice and dignity, the physical appearance of a Sikh is often ignorantly conflated with images of “Muslim terrorists,” some of whom also wear turbans. Ultimately, linking such features of “Muslimness” means that people who are not Muslim are also subjected to violence as a result of the racialization of Islam.

The conflation of Sikhs and Muslims shows how shallow Islamophobia can be – Sikhism does not share Islam’s Abrahamic lineage and has no direct connection to Islam, unlike Judaism or Christianity. Sikhs also do not originate from anywhere in the Middle East, but from the Punjab region of India.

Nevertheless, Sikhs are conflated with “terrorists” for the over-simplified reason that the turban – one of the most common forms of headgear in the world – is associated with the Middle East and ultimately Islam.

While turbans are commonplace in many Muslim-majority countries, there is no similar requirement to wear a turban in the Islamic tradition. These cases suggest that one does not actually have to “be” a Muslim in any theological or cultural sense to be singled out for assault. Rather, what matters is how one looks, and whether those “looks” are conflated with Islam and Muslims.

In the first month after 9/11, the Sikh Coalition, an advocacy and civic rights organization, documented more than 300 cases of violence and discrimination against Sikhs in the United States. It is now 2017 and many Sikhs say that they feel no safer in this country, primarily because of the continued conflation between Sikhs and Islam.