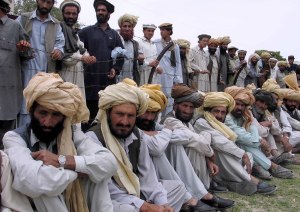 ‘These are the Pashtun Tribes… The Afghans have never been defeated in history — they will destroy themselves. You blow up their villages, destroy their families, but they are very much like the Americans — they believe in independence and freedom… Lord Curzon, the Viceroy of India, once said, ‘Waziristan is beyond control. What they need is the steamroller — a steamroller to go from one end to the other end to completely crush them. But I will not be the steamroller’. – Akbar Ahmed