Catholic Online, a leading news source for Catholics in the US and abroad, recently created the headline “Obama orders closure of Vatican Embassy.” This headline is misleading, overtly political, and even dangerous as it helps reproduce the myths that President Obama is anti-Catholic and that he is also a Muslim.

Catholic Online forgot this quintessential point in their headline: President Obama has not shut down the US government’s diplomatic connection to the Vatican. The US State Department has decided to simply relocate the Embassy, which will be moved to a US government compound that also holds the US Embassy Rome and the US Mission to UN Agencies in Rome.

Catholic Online’s careless headline, however, led to a ration of outrageous comments on their Facebook page. 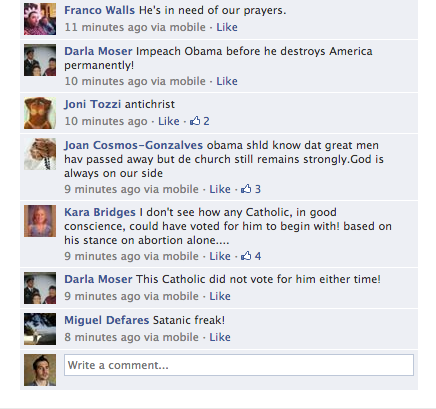 Catholic Online users suggest that President Obama is “satan” and thus the “anti-Christ.” Users such as Joan see his move as a “war on Catholicism.” Darla Moser thinks President Obama’s should be impeached. Of course all of these comments have been made by readers who thought that President Obama has completely shut down the US’s diplomatic presence to the Pope.

Other comments on Catholic Online’s Facebook page were equally troubling:

Cynthia Jessup insinuates that President Obama’s decision is grounds for his assassination. Reading her comment makes one wonder if she would have any sympathy if he was indeed murdered. We also see several other Facebook users calling him the “anti-Christ.” 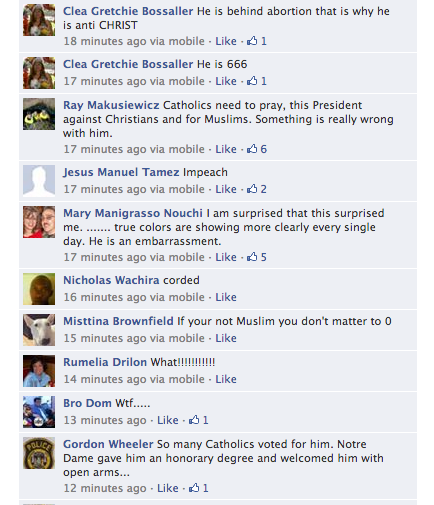 Misttina Brownfield claims that President Obama only cares about Muslims. Ray Makusiewicz believes that the President is deliberately acting against Catholics and for Muslims. The on-going myth that President Obama is a Muslim simply will not go away even though he has repeatedly told the world that he is a Christian.

Catholic Online’s careless news headline helps reproduce the myth that Obama is conducting a deliberate war on Christianity. Beyond that, one can argue that the headline is not only careless, but also deliberate and outright lie.

Catholic Online should be a much more responsible news outlet. Fanning the flames of misunderstanding and anti-Obama rhetoric only helps sow more ignorance, division and hatred. One would think that as a Catholic news source, Catholic Online would be more interested in finding ways to ferment knowledge, understanding and peace. It appears that it has a long way to go in behaving in the spirit of Jesus Christ.