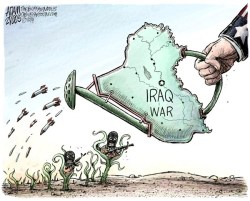 Chuck Hagel, US Defense Secretary, said in an interview last week that Washington might send American ground troops to Iraq to help “turn back” the Islamic State’s (IS) advancement in Syria and Iraq. To be specific, Hagel stated, “I think [the situation] may require a forward deployment of some of our troops … I would say we’re not there yet.”

US troop deployments to Iraq goes against a June 2014 statement issued by President Obama. In the message, the President voiced his concern about violence in the Middle East, in particular the Iraqi rebellion, which pushed the US-puppet state into a frenzy. Despite the chaos, Obama stated, “we will not be sending US troops back into combat.” However, he added that “terrorists … could pose a threat eventually to American interests, as well.”

Just a few months after this statement was released, Washington started beating its war drums after so-called IS rebels reportedly produced videos showing the beheading of an American “journalist.” In response to the video, which some have argued are fake, the American public quickly – and overwhelmingly – viewed IS as a “serious threat” to “vital US interests.” The propaganda video, nonetheless, convinced Americans that airstrikes were necessary in Iraq and Syria, as noted by a Washington Post-ABC News poll.

Many writers, such as Ken Walsh, warned that the propaganda video would be used to justify warfare and, perhaps, a reinvasion of Iraq.

Five months after the videos were released, Obama deployed 1,500 US troops to Iraq to expand America’s new war. Shortly after this deployment, in December 2014, US soldiers allegedly clashed with IS in the town of al-Baghdadi in Iraq’s western Anbar province. The US Department of Defense website noted in late January 2015 that American troops will also soon begin training “moderate” Syrian opposition forces. To make it simple, the US has indeed reinvaded Iraq.

Ironically, President Obama repeatedly took credit for “ending” the Iraq War while he was running for president in 2012.

So much for that.

So why did this US reinvade Iraq, a country that it has invaded multiple times over the last 25 years?  A vast number of sources have discussed how US forces are actually working with, and not against, IS in Iraq and Syria. Souad Mekhennet, co-author of “The Eternal Nazi,” stated that the US government trained IS rebels  to topple Syrian president Bashar al Assad’s regime, and as a result, direct a blow against its ally in Iran. The Mossad, Israel’s intelligence agency, has also been charged on many fronts with being directly behind the rise of IS in Syria and Iraq. The US and Israel, we know, are die-hard allies. Moreover, Saudi Arabia, a friend of the US and Israel, is likely the brains and bank behind the rise of IS.

In reaction to these reports, Iran’s foreign ministry expressed serious doubts that the US’s intention is to obliterate IS. A spokesmen from the ministry stated, “The pronounced goals of the [“Western”] coalition in the fight against terrorism are inconsistent with certain past and present deeds of its main architects and some of its members.”

All of these events brings us question what exactly the US is doing in Iraq. Back in 2007, Seymour Hersh reported in “The Redirection” that the US, Saudi Arabia, and Israel had agreed to create and deploy “Muslim extremists” across the Middle East to face Iran, Syrian, and Hezbollah in Lebanon. Hersh’s report is even more striking in light of the reports which discuss how Washington, Tel Aviv, and Riyadh are supporting, funding, and arming IS rebels.

In conclusion, the US has reinvaded Iraq to continue to destabilize the region. Its target is not IS, but rather the Shia block of Iran, Syria, and Hezbollah. IS is being used covertly to cause havoc around the region. The three-headed monster made up of the US-Israel-Saudi Arabia is working towards complete domination of the region. Is a Zionist-Wahhabi tandem, in cahoots with American Exceptionalists, the future of the Middle East?