“Racial grammar.” It’s not a word you hear every day in the U.S.A. That’s a shame because racial grammar explains a lot about race relations in America, especially in light of the Muslim versus non-Muslim binary. Muslims aren’t a race, it’s true, but that doesn’t mean that Muslims don’t face racism (See: “Muslims Aren’t A Race, So I Can’t Be Racist. Right? Wrong.”).

I taught racial grammar back in September in my “Race and Ethnic Relations” course at Rice University. I had students read the article “The invisible weight of whiteness: the racial grammar of everyday life in contemporary America” by Eduardo Bonilla-Silva, a sociology professor at Duke University. In his paper, Bonilla-Silva argues that “there is something akin to a grammar – a racial grammar if you will – that structures cognition, vision, and even feelings on all sort of racial matters. This grammar normalizes the standards of white supremacy as the standards for all sort of social events and transactions.” His main point is that “racial grammar is as important as all the visible practices and mechanisms of white supremacy.” In short, words used by media outlets produce and reproduce racism. Believe it or not, racism is much more than skin color and other phenotypes.

Before diving into the “racial” aspect of the term, let’s first consider one definition of “grammar.” According to the Oxford Dictionary, grammar is “the whole system and structure of a language or of languages in general, usually taken as consisting of syntax (arrangement of words) and morphology (the study of the forms of things).” Grammar provides us with a set of structural “rules” in our everyday languages. These rules create a certain kind of hegemonic discourse over how we think and talk about certain people and events like “terrorists” and “terrorism.”

There’s an additional conceptual dimension that must be considered when “racial” is placed before grammar. Bonilla-Silva outlines three main underlying factors in conceptualizing racial grammar. These elements include:

Racial grammar shapes how people learn to feel differently about race and racism. These three elements normalize the standards of white supremacy as the standard for social interactions and everyday transactions in American society. Racial grammar creates racial domination because it shapes how we see or don’t see race in social phenomena; it also informs how we frame matters as racial or not race-related.

In this piece, I apply the theory of racial grammar to media coverage of violence, specifically violence carried out by “White men” and “Muslim men.” I will use the attack on the Planned Parenthood Clinic in Colorado (and a few other examples) as a way to explore how racial grammar reproduces racial inequality.

Consider the title of the following article: “Planned Parenthood shooting: Witness faced off with gunman at parking lot.” The first line of the article reads: “A gunman who killed…” Throughout the article, the word “gunman” appears repeatedly. The first line of the third paragraph even refers to the killer as a “suspect,” as if we shouldn’t really believe he committed the crime. That’s letting him off easy, no?. Notice the event is also heralded as a “shooting” but not a “terrorist attack.”

So why isn’t “terrorism” applied? Because the killer is a White Christian. Only Brown Muslims can be terrorists. Don’t get that tangled and twisted. You’ll break the racial grammar rules.

The racial grammar rules in Western media pin-point the real bad guys, and the baddest guys are Muslims. Unfortunately, people watch and listen to this coverage and buy into the narrative: the “us” versus “them” dichotomy which paints non-Muslims and Muslims against each other. I elaborate on this point in this recent post via my Facebook page:

It’s amazing that some of you only post about “terrorism” when “we” are attacked. “We” meaning the so-called “civilized West.” The attacks in Paris remind me that many people do not see all human life as being equal. Ultimately, This attack highlights the hierarchy of human life in America and elsewhere. We value some people, but don’t value others. An American’s life is worth more than an Iraqis’, a French worth more than a Palestinian. Many of you think that. Somehow, what happened in Paris is not justified, it’s barbaric, but everything “the West” has inflicted on others, the EXTREME violence, is somehow justified. The deeply ingrained racism is real. Very real.

Racial grammar is also displayed in coverage of violent attacks in North Carolina and Denmark. CNN and FOX were quick to use the “terrorism” label after the attack in Copenhagen, Denmark. CNN ran an article titled “Denmark: Funeral held for Copenhagen terror attack victim.” FOX News, on the other hand, made sure to include the word “Islamist” before “terrorism,” you know, to prove the point that “Muslims” were behind it. In both cases, CNN and FOX added fuel to the fire of Islamophobia. These outlets want you to believe that Muslims are the only “terrorists.”

Words like “terrorism” or “terror” were not used when Craig Hicks murdered three Muslim students at the University of North Carolina – Chapel Hill. This event was declared a “shooting”, even though Hicks’ anti-Muslim stance was documented by the New Yorker. The double standards can be viewed with your own eyes. The image on the bottom left appears to humanize Hicks by painting him as someone with a “soft heart.” Notice that there’s no mention of the word “terrorism” in that picture. CNN persuades us into thinking he’s a “crazy person” and not a “terrorist.” 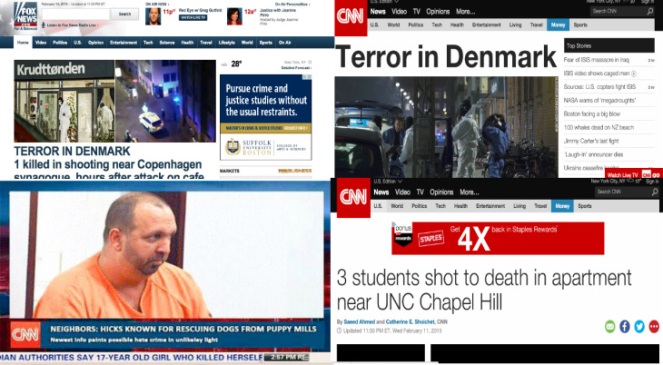 Imagine if the “terrorism” label was used in cases of White Christian men. America would have a serious problem. The entire “war on terror” narrative would collapse; Muslims wouldn’t be the only terrorists anymore. The “terrorists” are right here living among us. We’d have to deploy the might of the American military to squash them.

Words like “terrorist” and “terrorism” are used by media as propaganda terms to manufacture anti-Muslim sentiment, which in turn “justifies” worldwide military adventures to dominate other countries. Muslims have to be painted in a scary and violent light because doing so creates hysteria and fear of the Other. That’s the only way that wars can be justified.

Bonilla-Silva calls on people to fight racial grammar and “its poisonous effects even if, like smog, we cannot see how it works clearly.” I couldn’t agree more with him. The media’s “rules” in depicting “terrorists” and “terrorism” must be replaced with a more “fair and balanced” analysis. Ironically, this is FOX’s motto.