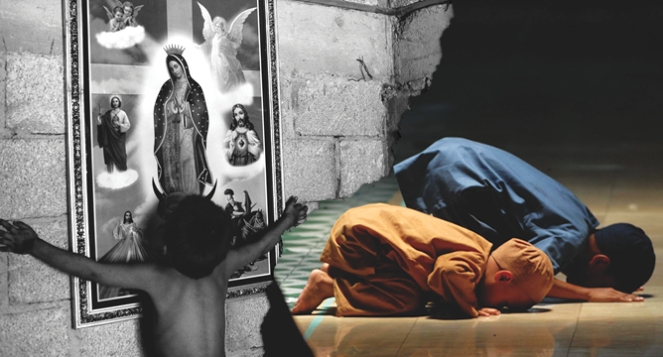 As an advocate of interfaith dialogue, particularly between Christians and Muslims, I’m often faced with the issue of conversion. People ask me, “If you admire Prophet Muhammad so much, why don’t you convert to Islam? Why don’t you accept him as “the seal”? I see these questions popping up on my Twitter and Facebook feeds more than you might imagine.

Basically, me admiring Prophet Muhammad isn’t “enough” for Muslims; in their eyes, I must take a few concrete steps towards Islam to be fully recognized as a “true believer.” Otherwise, I’m just a weirdo Christian who respects Muhammad, but doesn’t recognize him as a “the man.” Christians, on the other hand, have called me “pseudo Catholic” and “infidel” for my positive writings about Muhammad. For these Islamophobes, I’m quite simply a heretic. There’s no way around it. Perhaps my work is irritating to Muslims and Christians because I’m pushing a few traditional boundaries and making people question the very heart of their religious traditions and identities.

Here’s the main issue according to popular narratives: Muslims must recognize Jesus as a prophet of God, as laid out explicitly in the Qur’an. Muslims aren’t at risk of anything when they say “I believe in Jesus.” However, if we switched the situation (“I’m a Christian. I believe in Muhammad as a prophet”), people might start to question my credibility as a self-professed Christian. People might say, “Jesus is the only way. You’ve turned your back on God. You’re no longer Christian.”

I’m writing this piece to explain why I disagree with the idea that Christians can’t recognize Muhammad as a prophet. Really, what is in question here is the definition of “prophet.” “Prophet” can be defined as “a person regarded as an inspired teacher or proclaimer of the will of God.” Outside of the dictionary, I’ve always understood “prophet” to mean a messenger of a Higher Power who works on earth to bring justice and peace to humanity.

Let me say this right off the bat: I fully recognize Muhammad’s greatness. He was an exceptional person; he might even be the greatest and most influential human being ever to walk the face of the earth. Prophet Muhammad brought love, peace, and much more to a part of the world that had little of these things.

One of the most overlooked aspects of Muhammad’s character is his fierce anti-racist stance. He made the unprecedented move of considering both white people and black people as equals in the eyes of God. Yet many Christians still refuse to recognize Muhammad as an “inspired teacher or proclaimer of the will of God” (read: a prophet). The issue for some Christians, perhaps, is that Muhammad claims to have the last and universal truth. This rubs some Christians the wrong way. Only Jesus can make this claim.

In conversations I’ve had with Muslims, a frequent topic of discussion is Muhammad is “the seal of the prophets.” They add that both Moses and Jesus predicted his arrival. Christians, however, find it difficult to “find” Muhammad in their Bible. While some Muslims cite John (14: 16-17) as proof that Jesus predicted the coming of Muhammad, many Christians find it difficult to interpret this verse as the “truth.” Perhaps they’re in denial, though it doesn’t even matter. Christians don’t buy it.

Nonetheless, Christians argue that it is “anti-Christian” to say that Muhammad is a prophet. Because Jesus is the clear-cut revelation of God as noted in the Bible, Christians (the argument goes) must not accept any other figure besides him. However, I see nothing “anti-Christian” in recognizing Muhammad as a prophet. As I mentioned earlier, I like to view the word “prophet” as having a very broad meaning. In fact, I don’t even like to place it in the realm of “religion,” especially not in the Abrahamic tradition. To me, a prophet is someone who has valuable insight and intuition, who is sensitive about the well-being of others regardless of their ethnic or religious backgrounds.

I realize that some Muslims may not be happy with me putting Muhammad on par with other prophets. To be honest, I don’t see Muhammad as the “final prophet.” That’s too limiting for me, but it’s also why I’m able to consider him to be a prophet on equal footing with Jesus and others. To be clear, neither Jesus or Muhammad is the “final prophet” in my mind. I can’t imagine a Higher Power that stops allowing prophets on earth. This world of ours is broken, and so prophets will emerge as the days move forward. I don’t believe in “seals” either. Nothing is “sealed.” My views on life in general are too infinite for that kind of “truth.”

With that being said, both Muslims and Christians will say that I’m “confused” or “insane.” How can you be a Christian if you say Muhammad is a prophet? Why, then, are you not a Muslim? What are the boundaries of your religious identity? Are you both Christian and Muslim? What is going on with you?

I understand. It’s confusing, but life is messy, and “religion” perhaps even more so. A clarification is in order: Do I believe in everything that Prophet Muhammad said according to the Qur’an and hadiths? No, I don’t, but I also don’t believe in everything that Jesus or Moses said according to the Gospel or Talmud. Things kind of cancel out, even out. I accept aspects of both, but neither in their entirety.

When I read the Qur’an, I don’t interpret it as a book for Muslims, but rather for all human beings. The Qur’an (5:47) requests people to “discern what God has sent down to him.” The word “discern” is a crucial one. Literally, discern means to “perceive something.” My mind tells me that Jesus and Muhammad have equally valuable messages. Both men shared some “truths,” but let’s be real: they were human beings. They were prone to error. They made some mistakes. They missed some things.

Let me wrap this up by returning to the question: Is Prophet Muhammad worthy of admiration among Christians? I believe he is. His central concern was to lead mankind on the “right path.” By right path, I mean justice, mercy, compassion, love, tranquility, and peace. For these reasons, I elevate him to “prophet status.”

In conclusion, as a Christian, I don’t see my “religion” or “faith” as having a rigid set of principles. The meaning of my religion and faith changes from time to time, from moment to moment. “Christianity” has gone through a similar process. What it means to be Christian today differs significantly from what it might have meant in the 1st or 15th centuries. In short, my religion is fluid. My code is not set in stone, and to be honest, it never will be. I’ll always allow space for new ideas, new people, new movements. I’ll always find a way to make things “Christian.” That’s the beauty of “religion” – it can always be made relevant to our current situations.

To push that boundary of “Christian identity” is to pave the way for a future that makes more room for the “Other.” Isn’t that what prophets expect of us anyways?