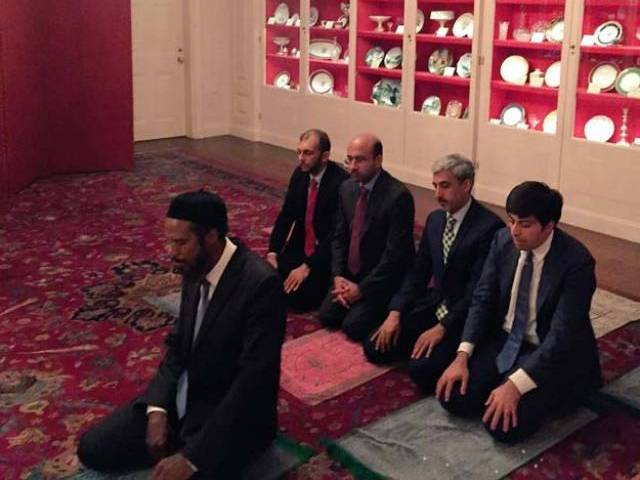 Qasim Rashid, an Ahmadi American, is my good friend. Years ago, his family fled Pakistan, a country that deems Ahmadis as “non-Muslim”. Ahmadis in Pakistan are persecuted to the point where they are openly murdered without any ramifications for the murderers. Ahmadis cannot refer to their places of worship as “mosques”. They also cannot use the term assalamalaikum, Arabic for “peace be with you”, in public. For these reasons, Qasim appreciates being an American citizen because the United States offers him what Pakistan does not – freedom of religion and freedom of conscience. Qasim and I are kindred spirits, because we both care about these values. We care about human rights.

Yesterday, Qasim had the honor of giving the Islamic call to prayer at the White House. It is truly a symbolic event. A Pakistani immigrant, raised in Illinois, openly practices his faith in arguably the most important building in the United States. This represents the best of American values. “Come as you are”, or, as the Statue of Liberty has it, “give me your… huddled masses yearning to be free”.

Qasim’s act of religious pluralism makes me wonder if such an act would happen if Donald Trump sat in the White House.

Trump has a bleak track record thus far in terms of religious freedom and other human rights, especially as it pertains to Muslims. In recent months, he has called for a complete shutdown of Muslim migration to the United States, a possible system where Muslims have to carry ID badges identifying them as Muslims (like Hitler did to Jews), and a plan to increase the monitoring of mosques. Trump has even suggested possible internment camps for Muslims. Basically, he represents the antithesis of American values as defined by the Founding Fathers.

Benjamin Franklin once told an audience that Americans should build places of worship so that even the Muslim leader of Constantinople, now Istanbul, could have a forum to openly discuss Islam. Thomas Jefferson, who studied the Quran, championed religious freedom. Writing for the Virginia colonial legislature in 1777, he noted that “the Jew, the Gentile, the Christian, and the [Muslim], the [Hindu], and infidel of every denomination” are welcome to the United States. Jefferson’s statue at the University of Virginia also shows him holding a tablet which states, “Religious Freedom, 1786,” below which is inscribed “Allah” alongside “Brahma.”

George Washington, the first president of the United States, also championed religious freedom. In 1783, he stated, “the bosom of America is open to receive… the oppressed and persecuted of all nations and religions, whom we shall welcome to a participation of all our rights and privileges… They may be [Muslims], Jews, or Christians of any sect, or they may be atheists.”  Washington’s message is simple – the United States is founded on E Pluribus Unum, meaning “out of many, one”. He wanted America to be a civic nation where a common sense of “we” is not defined by ethnicity or religion, but rather citizenship rights.

Qasim Rashid exercised his rights as an American citizen in the White House. Franklin, Jefferson and Washington looked down at him and thought, “This is what it means to be American”. The verdict is out on whether Trump will live up to their ideals.

4 thoughts on “Would Trump Allow the Call To Prayer in the White House?”