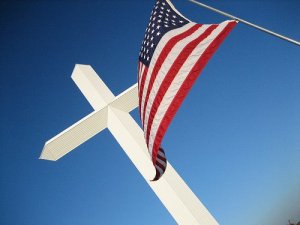 “America is a Christian nation” is one of the Christian right’s favorite slogans. Consider Ben Carson, a radical Christian and frontrunner for the 2016 Republican presidential nomination. He believes that the United State’s founding documents prove that the American nation was founded upon Christian principles. What is worrying is that Carson is not alone in his beliefs. Televangelists, born-again authors, and pulpit preachers all refer to a “Christian foundation” of the United States.

The idea that America was founded on Christian truths is problematic for several reasons. One is the truth claim itself. Who is to say Christianity is morally superior to other religious narratives? The danger with the Christian Right is their absolutist mentality; that Christians – and certain Christians at that – have a monopoly on knowledge and American identity. Even worse, they claim to have a monopoly on the nature of God Himself.

In addition to the absurdity of religious truth claims, citizens like Ben Carson commit a thought crime of treating Christianity as a monolith. The Christian population in America has never been uniform in its principles or doctrines. It is a fact that the revolutionary and republican period had a plurality of Christian interpretations, including Baptist, Quaker, Roman Catholic, Lutheran, Anglican, and Congregationalist. America is no different today. Churches of all denominations are sprinkled across the country. So when Carson refers to a Christian foundation, what exactly is he referring to? Quakerism? Catholicism? Mormonism? What?

In addition to these ontological issues, the argument that “America is a Christian nation” does not make sense in light of the work of the founding fathers. These men were more socialist, secularist, and humanist than they were Christian. Author Richard Hofstadter, in his book Anti-Intellectualism in American Life (1974), notes that upwards of 90 percent of Americans were “unchurched” during the revolutionary and early republic years. So even if the founding fathers were Christian, how Christian were they?

In reality, the founding fathers were more comfortable with a Deistic understanding of God than a Christian one. Hardly any of the founders used conventional Christian language when writing or speaking about God. Instead, they used words like “Supreme Architect,” “Nature’s God,” “The Creator,” and “Superattending Power.” These words have an obvious secular, non-Christian nomenclature.

To be clear, Carson is categorically wrong when he claims that America’s founding documents prove that the country was founded on Christianity. Go read the Constitution. Do you say any reference to God? While there is one minor note in the document, it only relates to the date (“Done… in the year of our Lord…”). That is hardly enough material for us to honestly say: “see, America was founded upon Christianity!” 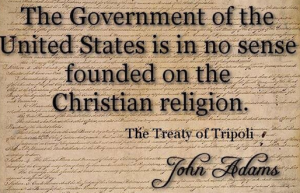 Aside from their domestic affairs, the founding fathers did not depict themselves as a Christian nation in their diplomatic efforts. One example is found in a passage from the Treaty of Tripoli (1797). This Treaty affirms that “the Government of the United States of America is not, in any sense, founded on the Christian religion.” Interestingly, the Treaty was an agreement between the United States and the Muslim state of Tripolitania. This diplomatic effort is significant because it shows that the founding fathers wanted Muslims to recognize America’s secular origins.

So let us be clear in dealing with Ben Carson and other people on the Christian Right. The founders did not intend for the nation to be Christian.