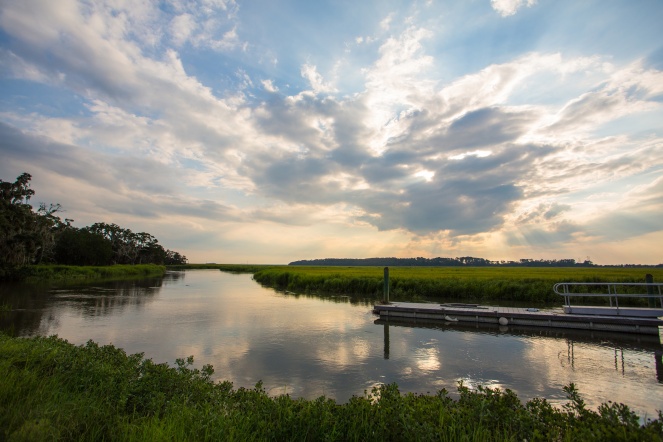 “Islam is a new religion to the United States.” You might hear some citizens utter this statement while trying to push the idea that Muslims do not belong in American society. History, however, tell us that Muslims may have reached modern-day America as far back as the 12th century. Other, more concrete evidence reveals that small Muslim communities emerged around the United States in the 18th century.

Sapelo Island, off the coast of Georgia, is a tiny island situated about sixty miles south of Savannah. The 16,500-acre island is Georgia’s fourth largest and, except the 434-acre African American community of Hog Hammock, is entirely state-owned and managed (Georgia Encyclopedia). The name Sapelo is of Indian origin, being adapted to Zapala by Spanish Christian missionaries (ibid.). During the 16th century, the Franciscan mission of San Josef was set on the north end of the island near the Native American Shell Ring, a prehistoric ceremonial mound that represents one of the most unusual archeological features on the coast of Georgia (ibid.). The English later colonized Georgia beginning in 1733, and the Creek Indians eventually ceded Sapelo Island to them in a treaty dating back to 1757. During the American Revolutionary War, a few private owners cultivated the land. Several French businessman were also involved on Sapelo Island around this period.

So where do Muslims fit into the history of Sapelo Island?

The story begins with a man named Bilali Muhammad, a member of the Fulbe tribe who was originally from Timbo, Guinea. According to Jerald F. Dirks, author of Muslims in American History: A Forgotten Legacy, Bilali is said to have been enslaved first in the Bahamas. Later, in 1802, he was purchased by Thomas Spalding of Sapelo Island. Dirks also claims that Bilali was educated in Arabic and the Qur’an, and he may well have trained to become an imam, or prayer leader of Muslims, before his enslavement.

The Spalding plantation on Sapelo Island consisted of 4,000 acres of land in 1802, but it soon grew to encompass the entire island and employed about 400 to 1,000 slaves (Dirks, p. 167). According to Dirks, Spalding gave his slaves an individual plot of land to work and six-hour work days, rare for an enslaved person in the American South during that time. More relevant to this blog, Spalding allowed his slaves the freedom to practice their Islamic faith openly, and even granted them permission to build a mosque that would serve as an Islamic place of worship on Sapelo Island.

Of note about Bilali is his family background. He had twelve sons and seven daughters. Some of his children had Arabic names such as Fatima and Madina. All of his daughters are said to have spoken English, French, Pulaar (the language of the Fulbe), and Arabic (Dirks, p. 167). The educational background of Bilali’s children is not surprising considering his personal character and conduct. By about 1812, he had become Spalding’s plantation manager. He reportedly maintained all the plantation records in Arabic (ibid.).

Also in 1812, Spalding placed Bilal in charge of the plantation during the War of 1812 between the United States and Great Britain. Bilali guaranteed Spalding that every Muslim slave would fight to the death to defend Sapelo Island from the invaders. Spalding even went so far as to give Bilali 80 muskets to help in the defense of the island (Dirks, p. 167).

I had the opportunity of visiting Sapelo Island back in 2009 as part of the “Journey into America” project. This project culminated in both a book and documentary. Our research there set out to answer the following question: “how long might religious custom and tradition survive among people dislocated from one society and transported to another where people deliberately set out to obliterate them?” (Ahmed, p. 163).

Our Sapelo guide, Cornelia Walker Bailey, is a direct eleventh-generation descendant of Bilali Muhammad. She told us that Bilali was originally from North Africa and possibly studying Islam or preaching when he was captured (ibid.). According to her, Bilali was first taken to Middle Caicos and then to Sapelo Island, where he became the head “enforcer” over the other slaves.

For Bailey, “history amounted to a constant battle to preserve as much of her people’s identity as possible” (Ahmed, p. 165). Her African Baptist Church on Sapelo served to assert the congregants’ unique identity and distinct ancestry from Africa, including some possible Islamic roots. Ahmed (ibid.) comments: “Even though worshippers were Christian, once they entered the church the men went to a section on the left and women to one on the right. The church was called a ‘prayer house’ rather than a church, an echo of the meaning associated with the term ‘mosque.’ Churches face the east… Perhaps the significance of facing the east comes from the fact that Mecca, which Muslims face to pray, lies in that direction.”

Though it is impossible to say with 100% certainty that Sapelo Island is the first Muslim community in the United States, we do know that it was one of the earliest communities made up of people following Islam in the country.

In defending Sapelo Island, Bilali sacrificed his own life and his family’s life to defend American territory. This is a remarkable feat considering that the British had offered all slaves of the United States their freedom if they fought for Great Britain.

So much for the idea that Muslims have not been loyal to the United States.

Journey into America: The Challenge of Islam by Akbar Ahmed

5 thoughts on “Sapelo Island, Georgia – The First Muslim Community in the United States?”

🙏🏻🕊❤️
Greetings of peace: you are free and welcome to join this webinar tomorrow. I will be engaged in a conversation/discussion on my latest book, “The Humanity of Muhammad: A Christian View.” Organized by the Department of Islamic Sciences at Bedër University in Albania. Click the link in my Instagram biography for the Zoom link.
Happy Easter! Today humbly reminds us of the beautiful blessing of new life!
Spring has sprung. A time of hope and renewal. I am ready.
I continue to feel so blessed and honored to call her my wife. She has brought me so much joy and peace. Today is our two year wedding anniversary! 🎉
😇 💫💎
“Breaking bread” & food in general is an essential part of my existence & routine. I love to cook & share food, especially Italian food, on a daily basis.
Today is the birthday of my “Papa” (grandfather), Joseph Anthony Tedesco.
Forgiveness is liberating.
Tikkun olam.
The Considine family is feeling a little extra lucky on this Saint Patrick’s Day. Lá Fhéile Pádraig sona duit! ☘️
What inflicts one, inflicts all.
This is the prayer that has resonated with me *the most* in recent times. Authored by @jamesmartinsj.
Oxford University Press is engaged in the marketing of my next book: “People of the Book: Prophet Muhammad’s Encounters with Christians” (Hurst, Summer 2021). The pictures include a cover, book description, & contents page. The titles of the chapters provide an early glimpse 🙏🏻.
I am enjoying these early morning talks with my kindred spirits in India.
Someone is excited for Saint Patrick’s Day! ☘️❤️
Who is Abraham to you?
The Muslim Converts’ Association of Singapore (@darularqamsg) has organized a book talk on “The Humanity of Muhammad - A Christian View.”
The Angel Gabriel = a uniting symbol of three great faiths.
I say “live & let live.”
Loading Comments...
Comment
×
%d bloggers like this:
%d bloggers like this: